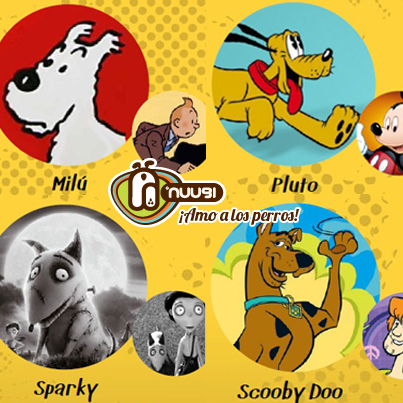 This little Fox Terrier accompanies its owner in all
his adventures solving mysteries. Since 1929 he has
become one of the most beloved animals in the
literature and entertainment.

Another Disney house. It was just last year when
Sparky stole our heart on the big screen. adorable
creature that is friendly even after his death.
Out of the mind of Tim Burton, Sparky appeared
first time in a short film made by the director in 1984.

What better way to show us a Great Dane
friendly than a caricature of “terror”. Scooby
Doo is one of the icons of  childhood’s people for two
generations. In addition to helping his team to solve
paranormal cases, some taught us to be gluttons.

Despite belonging to a cartoon for mature audiences
Snoopy is definitely the best character of dogs pop
culture. This is a so adorable Beagle that even if you are feeling
strong, want to have a stuffed animal to hug him every night.

If your best friend is of the same race as Snoopy, do not forget to give
premium food for medium breed, they contain the six
groups of essential nutrients to give it an excellent quality of
life. WE deliver it to your door: http://bit.ly/14TBFuN